Cannabis competitions have come and gone, but The Cowboy Cup gains horsepower each year.

Before medical cannabis was legal here, Daniel Lewis had a vision for a competition in his home state. He traveled the country to see how other medical and recreational states handled their festivals and competitions, handpicking some best practices and trimming things he didn’t think he would fit in the Sooner State.

“We work really hard to make it big enough and have enough different experiences that you want to stick around. Eventually, I want it to be like Disneyland. You can’t get through it all in one day,” founder and “THCEO” Lewis said. 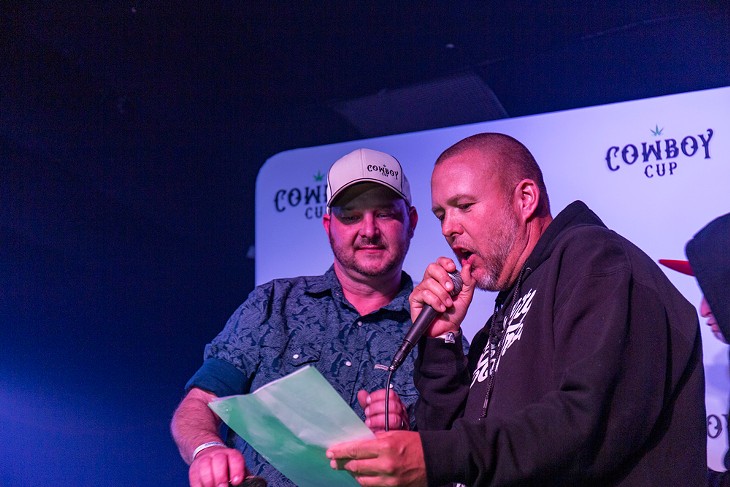 For this year’s competition, he created two tiers of judging. The first round will occur as usual, with local judges hand-selected by Lewis analyzing and ranking their top picks in the various categories that include multiple competitions for flower, concentrates and edibles as well as other products vying for a coveted “cup,” or in this instance, belt buckle.

Once the local winners are selected, a group of “Ganjiers” will be flying into the state to take the top finalists in the categories and put them to a rigorous and multifaceted test to determine the best of the best.

“A Ganjier is kind of in the essence of a wine sommelier, a chocolatier, a cigar aficionado, line of thinking…They have put together this program to start to train students to become certified,” Lewis said.

After online courses and quizzes, potential Ganjiers travel to Humboldt County for a weeklong training session that involves live training and a final evaluation before becoming certified. Instead of looking at overall aspects of the flower for the judging, they’ll be breaking each entry down further and judging by their own expanded criteria.

He is one of only two people living full-time in Oklahoma that has been certified, he said, so he knows how strict the standards are.

“It’s really good for the competition, because not only does it put the judging in the hands of arguably the people that are best equipped to judge cannabis, but the judging is taken away from Cowboy Cup again, so it’s this third-party blind verification that we didn’t get paid for you to win my competition. We’ve said it from the beginning—you can’t buy our buckle. We’re going to hold fast to that forever and I think without that, we really don’t have anything. It’s good for us for those reasons, but it’s also good for Ganjier because I think it gives them a good platform to put their skills to the test,” Lewis said.

After the awards ceremonies, bands will take the main stage inside the Tumbleweed, with Stoney Banks with SMO playing Friday night and AC/DC tribute band OKCDC wrapping up the Saturday festivities.

But there will be music running throughout the duration of the event, Lewis said, with live music beginning at noon and running until the awards ceremonies each night on the Oklahoma Shirt Company Festival Stage. Additionally, the Herbage Magazine/Lettuce Smoke Stage will feature 14 acoustic artists over two days.

If electronic music is more of your jam, the Smokin BRIXX Saloon Stage and DIME VIP Tent will be featuring DJs through the duration of the event.

In addition to the cannabis competition and live music, there will be a glassblowing competition with more than 15 artists participating. Glassblowers will bring their rigs and marbles to be judged, but the best pipe will be made and judged during the competition. There will also be a pool tournament and a joint/blunt rolling contest.

In addition to all the entertainment, there will be seminars ongoing throughout the weekend as well as eight food trucks on site to curb the munchies.

For the second year, The Cowboy Cup will also feature its own on-site dispensary, The Lettuce Smoke Box.

“We took a 52-foot shipping container and partnered with the Tumbleweed, but we’re going to have a dispensary there on site,” Chet Tucker, owner of the Lettuce Smoke Canna Co., which includes The Lettuce Bar in Choctaw where the judges pick up their packages for the competition.

“It’s a separate address, so we’re good there, right where the entrances to the ticket booth and the waiting line are. We’re going to carry anybody that’s part of the cup that wants in and give the patients and the people that are attending the cup some really smoking deals,” Tucker said.

“This year, what we’ve done is we’ve reached out to all the vendors and sponsors that wanted to get in that dispensary…Basically you can get $10 eighths, two for $5 prerolls, $5 infused prerolls, $10 For edibles, $10 for ice water hash, whatever they put in there. It’s award-winning stuff too, so you could literally go buy an eighth of ALTVM for 10 bucks out the door. An $80 ounce of ALTVM? Come on. Give me a break,” Lewis said.

One year ago today, a former hero became a villain