Who is Trump and Kanye’s dinner companion, Nick Fuentes?

(RNS) — When supporters of former President Donald Trump rallied near the White House on Jan. 6, 2021, a boisterous pocket of young men waving “America First” flags broke into a chant: “Christ is King!”

It was one of the first indications that Christian nationalism would be a theme of the Capitol attack later that day, where insurrectionists prayed and waved banners that read “Proud American Christian.”

The chant also announced the presence of followers of Nick Fuentes, the 24-year-old white supremacist and Christian nationalist leader who dined Tuesday evening (Nov. 22) with Trump and the rapper Ye, also known as Kanye West, at Mar-a-Lago, Trump’s home and resort in Florida.

Fuentes’ appearance at Trump’s table has brought criticism for the former president, who had only a week before formally launched a new campaign for the White House. The dinner apparently caused embarrassment in the Trump camp: Hours after reportedly saying that Fuentes “gets me,” Trump now claims he didn’t know who Fuentes was.

RELATED: How the Capitol attacks helped spread Christian nationalism in the extreme right

Fuentes’ notoriety has been growing since the then-18-year-old Boston University student attended the 2017 Unite the Right rally in Charlottesville, Virginia, where neo-Nazis and other white supremacists marched to protest the removal of Confederate statues from the city’s public spaces. At the time, Trump said there were “good people on both sides” of the clashes that followed, in which a counterprotester was killed.

Fuentes claimed that he had received death threats on his return to Boston, and he left college to begin a media career as the host of “America First with Nicholas J. Fuentes,” a livestreamed TV show that often echoed Trump’s anti-immigrant fulminations.

But while Trump sees the “America First” movement largely in terms of protecting U.S. trade and guarding the nation’s borders, Fuentes explicitly calls for the preservation of European American power. A Catholic, Fuentes has celebrated the idea of “Catholic Taliban rule” and, in March of 2021, told an audience at his America First conference that the United States, which he called “a Christian nation,” will cease to be America “if it loses its white demographic core and if it loses its faith in Jesus Christ.” 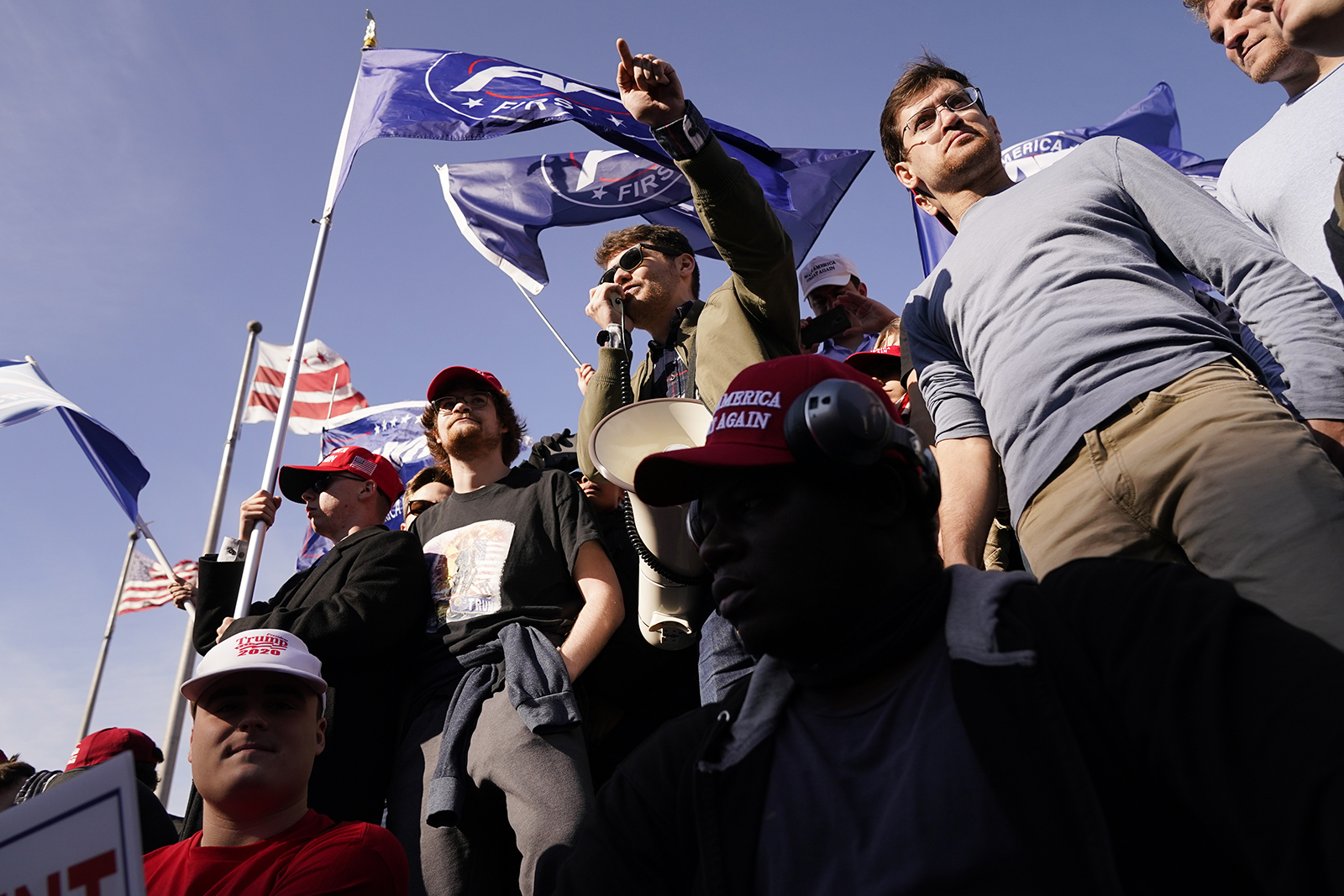 Fuentes has also denied the Holocaust on his America First livestream and has said that, as non-Christians, Jews have no place in Western civilization. West, who recently lost a licensing contract with Adidas after he issued an antisemitic tweet, was said to have brought Fuentes along to Mar-a-Lago as a consultant to his own as-yet-unannounced White House bid.

Though Fuentes was subpoenaed by the House committee investigating the Capitol attack, and a person carrying an America First flag was spotted in the Senate Chamber during the insurrection, there is no evidence Fuentes entered the Capitol himself on Jan. 6. But Fuentes’ channeling of religious fervor in the name of right-wing extremism has played no small part in keeping Christian nationalist ideology alive in the aftermath of the insurrection.

Throughout the pandemic, Fuentes and his supporters, known as Groypers, were one faction in a large and amorphous network of anti-vaccine protesters and anti-abortion demonstrators. At 2022’s March for Life on the National Mall, Fuentes’ Groypers held crucifixes aloft.

Through his America First conferences, Fuentes has distinguished himself by luring establishment figures, including elected officials, to his cause. Arizona Rep. Paul Gosar, the keynote speaker at Fuentes’ America First 2021 conference, tweeted “Christ is King” the same day the congressman posted a widely condemned animated video that depicted him killing New York Rep. Alexandria Ocasio-Cortez.

Rep. Marjorie Taylor Greene spoke in February at this year’s conference. “My name is Marjorie Taylor Greene, I am the daughter of the king, the one true living God, the Alpha and Omega, our Father in heaven, and I am a forgiven sinner, washed in the blood of our Savior Jesus Christ,” she said in her remarks before the group.

Both Gosar and Greene have since distanced themselves from Fuentes and his group. Now it is Trump’s turn to deflect an association with Fuentes.

The backstory behind Fuentes’ trip to Mar-a-Lago remains unclear, but the visit reportedly included efforts to maintain alignment between America Firsters and the former president. Fuentes publicly blasted Trump’s recent campaign announcement speech, calling it an “awful … abject, absolute failure” and declaring he was “reevaluating” his support for the business tycoon. According to Axios, Fuentes disliked what he characterized as the former president’s more cautious approach to politics and told Trump as much when they dined together last week.