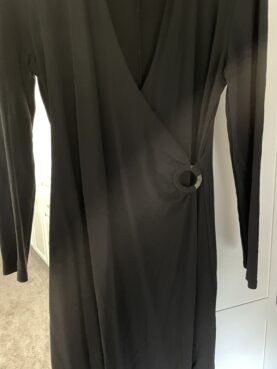 (RNS) — About 15 years ago at a resale shop I found a classic “little black dress.” It had everything, it seemed: It could be stuffed into a suitcase for days without wrinkling. It was versatile, suitable for many occasions and generously proportioned with ruching at the waist, making it impossible to tell whether any bulges were designed or the fault of the wearer’s inability to say no to chocolate cake.

At the time I was still in my 30s, and I guess I pictured myself wearing the LBD to parties — receptions at academic conferences, dinners with publishers, that kind of thing. Nerd glam, basically.

I was totally wrong. I don’t think I’ve ever worn it to a party; I don’t attend all that many and I’m more of a slacks person in any case. But I have worn this dress again and again to funerals, more with every year that passes.

I buried both of my parents in this dress, two years apart. I have worn it to the funerals of the parents of childhood friends (a generation whose members are dropping with alarming speed now) and to mourn the passing of some childhood teachers. It’s the dress I’ve pulled out for the funerals of various “Pillars of the Ward” — those stalwart members of my congregation who have moved to the kingdoms beyond.

And this summer, I wore it to the funeral of a good friend my own age, a distressing first. Kate was only 50 years old and had so, so many people who loved and needed her.

When another friend, who is in her 80s, complimented the dress, I told her a bit of its history as the LBD of my closet — now my little black funeral dress. She asked me directly if I was going to wear it to her funeral when that time came.

That prospect made me cry even harder.

I don’t know why some seasons of our lives make the specter of death more present, more immediate. I’ve been in one of those cycles for months. Several good friends are battling cancer and other serious illnesses, so I’m sure that’s part of it. My life is for the most part happy and fulfilling right now, but there’s an undercurrent of fear as I think about my loved ones’ various diseases and what these next months may bring to remind us of our mortality.

Another aspect is the awareness, every day lately, of what my family was going through exactly 10 years ago at this time. In early November of 2012, my mother was diagnosed with inflammatory breast cancer, which turned out to be completely different from her earlier two bouts with the disease. By early December it had spread to her bones and the lining of her brain, and by mid-December it had taken up residence throughout her abdomen. At the beginning of January she was dead. In all, just two months had passed from the time of her diagnosis to the day I donned the LBFD for her funeral.

As I’ve been revisiting my journal from those bewildering days, the rapidity of it strikes me all over again. One day, my mom could still walk, and the next day she couldn’t. One day, she could converse with the doctor about possible treatment options, and the next day she was too tired to stay awake during the meeting. The whole experience was and is a lesson in the fragility of it all, how quickly a body can simply close up shop.

But it was also a lesson in beauty. Through it all I felt a deep sense of the gifts of life and love. My mom retained her keen sense of humor almost to the end, as well as her curiosity. She mentioned one day how keenly interested she was by the way her body’s systems were shutting down in a particular (and apparently quite sensible) order, and by how her body already knew how to die.

She also kept her love of people and her spiritual generosity, telling me, for instance, that it would be fine with her if I chose to have her baptized and endowed in an LDS temple after her death, even though she was Lutheran and didn’t believe a speck in Mormonism. She was just concerned with me doing whatever might bring me some comfort after she died.

I didn’t wear my LBFD to the temple when I went there later on my mother’s behalf, but it occurs to me now that I should have. That dress has become a bridge of sorts between the living and the dead, so it would have been a perfect choice for the “thin place” that is the temple. Each time I wear it to mourn someone I’ve loved, it becomes that much more steeped in love and history. It’s an object made sacred by its proximity, again and again, to death.

A dog of sorrows, and acquainted with grief

Mormonism and the ‘little c’ church

The Mormon Jesus can handle your grief and pain

A trip to Woodland Hills Mall in Tulsa, Oklahoma