I’ve finally gotten the time to update my long-running Election Results Maps series with some posts looking at the 2022 Oklahoma general election.
For now, we’ll look at the race for Governor, Lieutenant Governor, and State Superintendent. I’ll work on additional races as I find the time. 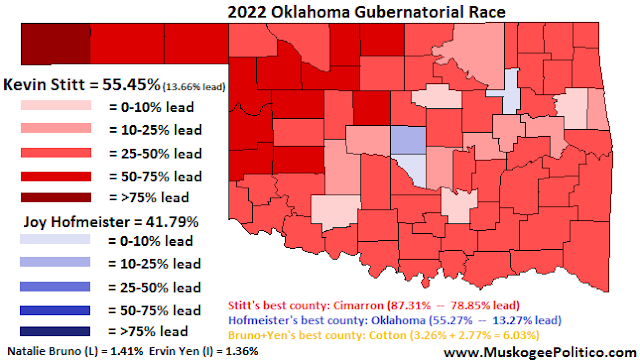 Gov. Stitt ended up blowing the race apart, compared to what most polls had leading up to election day. He ran up the score in rural Oklahoma, more than making up for his urban challenges.

Oklahoma County will continue to be a problem for Republicans, though Tulsa County seems to be improving. Indian country went for Stitt by generally large margins, despite the tens of millions spent against Stitt by the Tribes.

Ironically, the Libertarian and Independent candidates’ best county was the same – Cotton County. 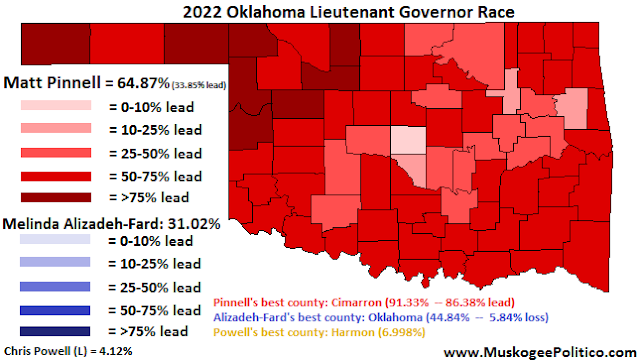 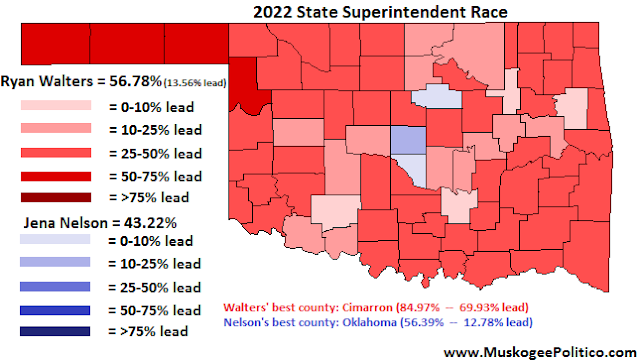 Other than the gubernatorial race, the State Superintendent contest was the only competitive statewide race. I’ll be honest – I did not expect Walters to win, much less by this wide of a margin.

Nelson won Oklahoma County by 12.78%, Cleveland County by 4.87%, and Payne County by 1.87%. Walters won Tulsa County by 2.67%, or 5,140 votes. Walters did better than Stitt in Oklahoma and Cleveland counties as well as Tulsa. Once again, rural Oklahoma came through for the GOP candidate.

I’ll cover more races in another post when I get the time. I’ve been in the middle of a small remodel at home and short on blogging time.